YCMF ended three days of spectacular concerts with a joyous performance of Dvorak’s Piano Quintet. Angela Hewitt joined Anthony Marwood, Martyn Johnson, Lilli Maijala and Tim Lowe in a musical celebration, a life affirming occasion when all the troubles that have beset us and the wider world seemed to drop away. These musicians played as though their very lives depended on it. And here was an audience spellbound. Truly world class performances: great Art reminding us of what it means to be human.

“These musicians played as though their very lives depended on it. And here was an audience spellbound. Truly world class…”

The festival played to nearly 600 people over three days. The festival began with a mesmerizingly beautiful recital by Angela Hewitt playing Couperin’s Pieces de clavecin which were harpsicord suites published in 1722, charming, characterful music played with grace and poise, wonderfully ‘voiced’. The same applied to Mozart’s Piano Sonata in D major. In effect it was written to demonstrate the composer’s virtuosity, now played effortlessly on the piano with wonderful finesse by Hewitt and a colourful palette to match. Her legendary playing of Bach was abundantly clear in the second half in his Prelude and Fugue in A minor, the fourth English suite and finishing with a powerful transcription of Bach’s famous organ piece, Passacaglia in C minor, (arr. d’Albert). Angela Hewitt’s playing almost defies description as her hands float across the keyboard.

The audience listened with an intensity that was palpable, knowing that they were in the presence of great musical performance. At the end we collectively rose to our feet. We had been reminded of what we had missed for nearly two years; a collective sense that truly great music has not been taken from us.

The same was the case with the two concerts the following day. Cellist Tim Lowe and pianist JP Ekins lunchtime recital played in the intimate space of the lovely Unitarian Chapel in the heart of York. The highlight here was the full glory of Rachmaninov’s Cello Sonata imbued with bell-like sonorities and the almost mystical atmosphere of Russian orthodox worship. Great beauty laid out for us by Tim Lowe’s passionate advocacy of what surely is Rachmaninov’s greatest chamber music work. The lovely sound world he captured in his encore piece, Rachmaninov’s Vocalise, left the audience hushed for a long time before the applause rang out and, I say with great sincerity, the tears flowed; mostly of joy and a few were, I am sure, bitter tears of loss.

At the National Centre for Early Music, formerly St Margaret’s Church, the string quartet concert In the evening also stirred us because these musicians embraced us in an art form, so intimate and pure. This was world class playing full of sensitivity, colour and playing of such intensity that time seemed to stand still. The programme was cleverly conceived starting with Haydn’s String Quartet in C Major, Op. 54, No. 2, with its strongly

experimental use of the instrument’s collective voices, ending in a mood of quiet contemplation beautifully placed by Anthony Marwood, Martyn Jackson, Lilli Maijala and Tim Lowe. The advantage of not being a permanent quartet was that it allowed them to experiment, to be free so the music spoke to us with a lovely, beautifully crafted spontaneity.

Mendelssohn’s String Quartet No. 6 in F minor, Op. 80 is a desperately sad lament for his recently dead sister and, as with the Haydn, quite unlike how Mendelssohn’s music is meant to sound. The slow movement Adagio is a time of repose in an otherwise turbulent quartet. It is Mendelssohn’s final song without words, a tender outpouring of love for Fanny, but was the last major piece he wrote because within only two months of Fanny’s death Felix too was dead, aged 38. All this angst, passion and love was so beautifully captured by the quartet. It was intense, deep mind playing but which was also free and uncompromising.

"One felt strongly connected to this legacy thanks to another superb, compelling performance."

The final item was Schumann’s String Quartet in A minor Op. 41 No. 1 one of the greatest of all string quartets written in a period of outpouring from Schumann of chamber music (during 1832). What we can now see is that this intense moment of chamber music composition puts Schumann in a pivotal role in European musical culture, absorbing the historic legacy of the string quartet but on close acquaintance one also hears within the folds of this music a new futuristic meandering imagination - Wagner, Brahms and even early Schoenberg miraculously if fleetingly appear! One felt strongly connected to this legacy thanks to another superb, compelling performance. As Steven Isserlis observes about Schumann’s music, “…he moulds formal conventions into new, half-hidden shapes: miracle after miracle.” A miracle did indeed happen here in the middle of York on 17th September 2021. Music played like this speaks straight to our souls. I’m sure this is what this audience meant in their quiet listening and joyful reception of York Chamber Music Festival ‘s String Quartet.

The second lunchtime recital at the Unitarian Chapel given by the pianist JP Ekins was a thunderous rendering of Mussorgsky’s Pictures at an Exhibition with lovely ‘Promenades and characterful playing to represent each of the pictures, ending with a peal of bells in which Mussorgsky portrayed the mythical Great Gates of Kiev, a tribute to old Russian nationalism. The Unitarian Chapel for a few minutes rang out a fantastic toll of bells!

Back in the Sir Jack Lyons Concert Hall the final concert in the festival brought Angela Hewitt and the quartet players together. The programme opened with Mozart’s String Quartet No. 17 "The Hunt", K. 458. Mozart worked long and hard to perfect this quartet because he heard Haydn’s new style Russian quartets which gave all the quartet instruments much greater equality, so moving the genre forwards. Mozart knew this to be true. The performance was once again deeply moving, shaping the music with immense subtlety, voicing of the parts, especially liberating the lower instruments, a real dialogue. As I said above the fact that these players are not a formal/regular quartet meant that they played with a lovely freshness and spontaneity; full of colours, subtle shadings beautiful phrasing but above all drawing the audience into their world so that we all seemed to share it as our own. This is a rare trick to pull off and is a tribute to this group of truly masterful players.

"The joyous Finalé was dazzlingly performed leading to a headlong upward rush of sound..."

The Mozart was followed by a performance of Mahler’s Piano Quartet in A Minor, in reality one movement of an abandoned youthful quartet and the Austrian symphonists only extant chamber music which remained unpublished until the late 1970s. It is serious, emotional and dark and wonderfully played with Angela Hewitt crafting the piano part while the string players delved into the darker recesses of the piece. Finally came a joyous performance of Dvořák’s Piano Quintet in A Major, Op. 81; a sunlit, effervescent piece with meltingly beautiful melodies throughout, folk dance in the Dumka movement and a bubbling Scherzo interrupted by a tranquil trio. The joyous Finalé was dazzlingly performed leading to a headlong upward rush of sound, a fitting way to bring York Chamber Music Festival 2021 to its conclusion. The hall erupted as one, normal Yorkshire restraint dissipating in the sheer joy of the moment. This was music-making of world class quality, reminding us all – players and audience – what we have missed for nearly two years.

Thank you Angela Hewitt, Anthony Marwood, Martyn Johnson, Lilli Maijala and Tim Lowe for giving us a great present, perhaps none greater, showing us – despite the terrible traumas we have faced together during the pandemic and across a seemingly unstable world order - what it means to be human. Live music returned to York to stir our very souls. Thank you, York Chamber Music Festival.

An incredible start to York Chamber Music Festival. The recital by Angela Hewitt was thrilling. 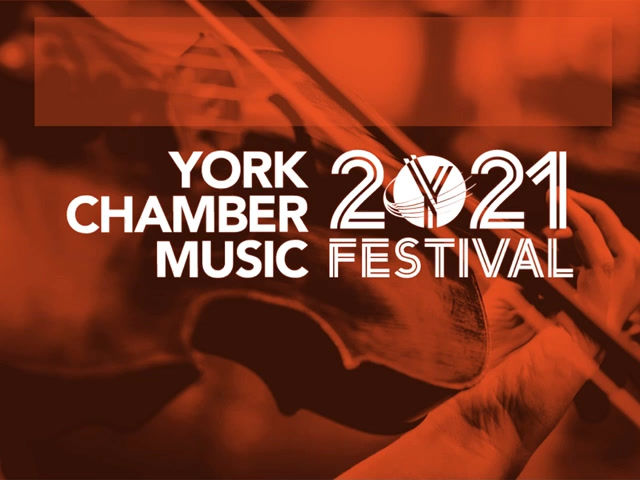 Rehearsals are well underway and tickets for the festival are selling fast! Tim reports that “…the players are excited to be working...